skip to main | skip to sidebar

The "Girls Just Wanna Paint" challenge for February is LOVE
and the paintings will posted tonight.
This was a no brainer for me. 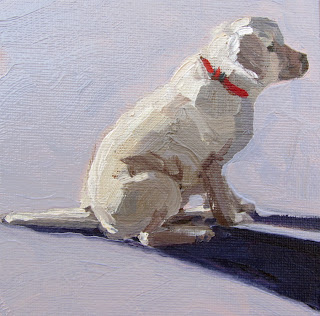 Note:
I took Cello to Home Depot to "socialize" her yesterday.
She just sat in the cart among the flood lights,
extension cords and batteries looking adorable.
I didn't get an image of it, but really
can you think of anything cuter? 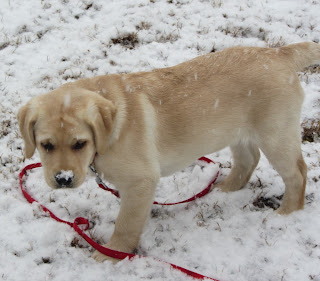 I've been thinking about ways to get my students
to "just see the big shapes."
I thought I'd try doing a painting upside down,
from a simple photo. 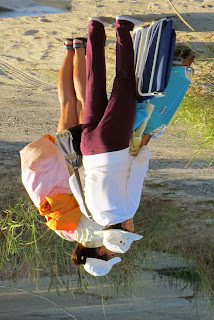 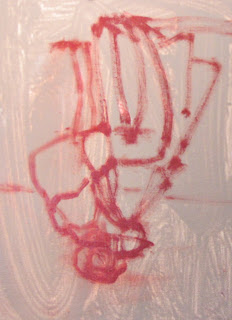 I felt totally lost until I forced myself to just focus
on the large, flat abstract shapes. 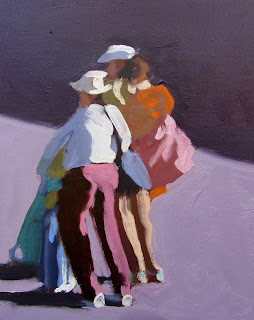 What a surprise this was when I turned it over!
I highly recommend trying this exercise
and plan on doing many more!
It's a great lesson toward "letting go".

Note: While painting this, the figure in the red pants reminded me
of a dear artist friend Ros Farbush
who recently passed away at 83 years old.
She was actively plein air painting right up to the end,
thanks to the many dedicated artist friends who happily
helped her schlepp her gear all over the place.
(Cape Cod, Holland, Mexico etc)
She was an extraordinary woman
and will be missed by many!


When I arrived at the opening of the Winter Members Show
at The Copley Society last night,
Suzan Redgate, the director, pointed to my name on "the wall".
My painting had received one of four awards!
They don't notify the award winners ahead of time,
so this was a happy surprise! 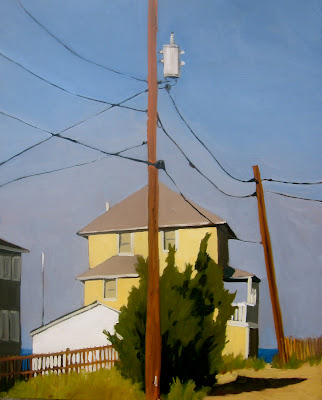 I'm thrilled, of course, but mainly because
it's a really large painting (for me) and
I took a risk putting that telephone pole right in the middle of it!
I guess it's really good to let go and stretch yourself
once in awhile!

ps. No picture of me to post.
I had on a weird outfit and my hair was flat.
Again. This was a surprise!
Posted by Nancy Colella at 6:16 PM 12 comments

Designing with Shapes of Color

My fun friend Sally came over the other day to paint.
We decided to try doing an abstract figure based on a
very washed out sepia toned photo a friend had given me.
There were no clear passages of light or dark,
so the challenge was to "design" the painting with shapes of color. 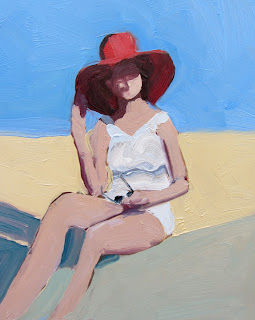 I used a gesso board, synthetic brushes, and lots of paint
to keep myself from any detail.
This was an interesting exercise!
With a little stretch of the imagination,
it almost feels like one of
Richard Diebenkorn's figures!?

PS. Sally and I both work with Alzheimer patients
and she gave my group a wonderful tour of an art show yesterday.
You can read about it on my other blog here.

Posted by Nancy Colella at 8:37 AM 3 comments

I played salsa music and tried a few moves
(in the privacy of my studio)
while finishing up this series.
What a fun way to paint! 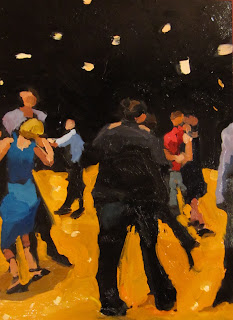 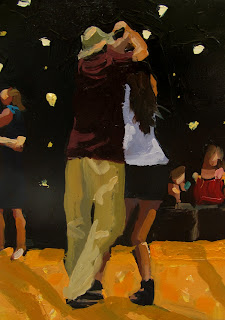 It was impossible to photograph these very well,
because of the thick black background,
but I wanted to share them.

They will be on view at the Copley Society
Small Works Show: "In the City"
Opening Feb 23 through March 29 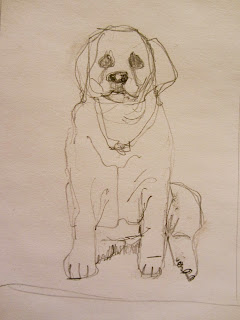 "I'm Just Mad About Cello.
Cello's just Mad about me!"

Between potty training, trips to Petco, taking pictures,
and all the lovin' goin' on here......
my painting time has been a bit limited.
I was able to do this quick sketch yesterday,
while she was sleeping under my chair. 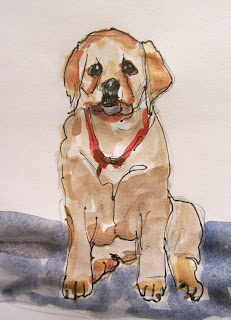 Cello at 12 weeks!
I just can't get enough of all that extra
roly poly soft yellow fur!

Posted by Nancy Colella at 7:26 AM 4 comments

One of the best things about having a birthday in February
is that TULIPS are available.
And they are one of my favorite flowers to paint! 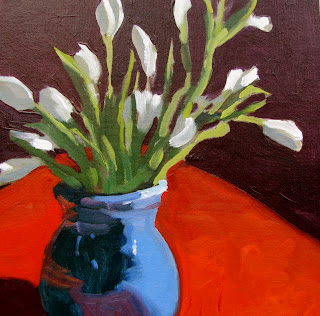 These were from my sweet and generous friend Kelley MacDonald.
I did this before they even opened!

The North River Arts Society
annual Members Show
opening reception is this Friday from 7 -10
That is always a fun party!

I 'd like to introduce you to
my new studio pal! 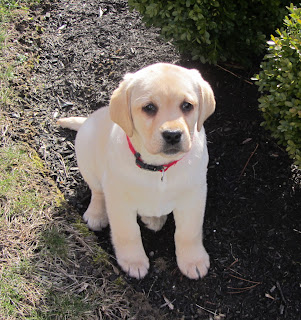 While she was asleep in my studio today, I tried to do a quick portrait of her.
It was a wiper- she kept looking like a stuffed animal! 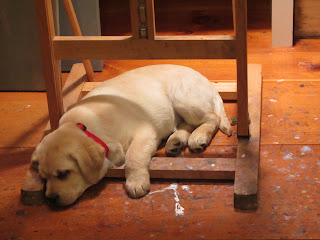 I am over the moon in love with her,
so I'm sure there will be plenty of "portraits" to come.

PS. I just had to bid on Jim Coulter's painting "Limoncello"
that he posted today!
Posted by Nancy Colella at 4:56 PM 10 comments 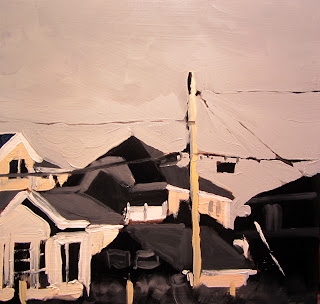 All that reading about the Macchiaolli Painters
and then doing the Three Value Exercise
with my class yesterday got me thinking about doing this.
I used black for everything in shadow,
added a little white to it for everything half in and half out,
and tinted the white a "local" color for everything in the light.
This is such a fun way to paint.
It really makes you think!

Limiting yourself to only THREE values in a painting,
really drives home the importance of getting your values right!
It forces you to simplify the shapes
and make design decisions ahead of time. 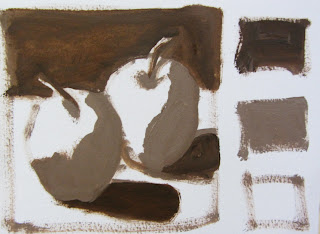 Today, on white watercolor paper, we used only three values;
black, white and a middle value grey (50% black 50% white).
Note: The tendency is to mix the middle value too dark
so be sure to compare it something!
NO Blending. Just flat shapes! 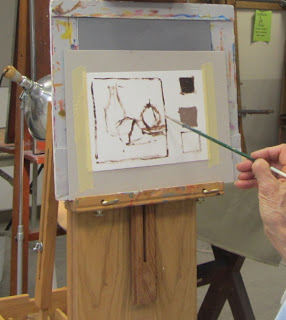 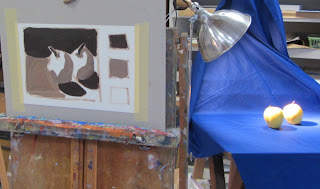 It is surprising how much drama you can create with
just three values and good design!
Here is just a sampling of the results! 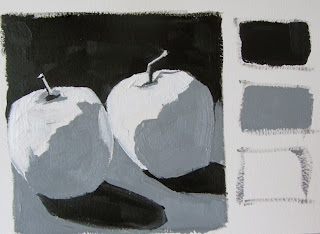 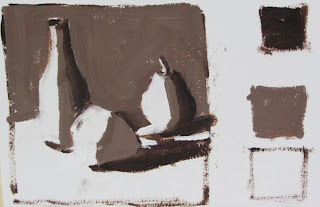 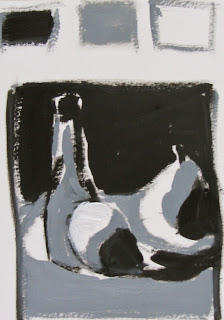 I recommend this exercise to both
beginners and experienced painters.
It's eye opening and a lot of fun!

I just read a fascinating article in the
Winter 2011 edition of Plein Air Magazine
about a group of 19th Century Italian painters
called the Macchiaioli.
(Macchia refers to the overall effect
or the value structure of the composition.)
Their goal was to translate the harsh contrasts of the
Tuscan sunlight and shadow
by using a simple patchwork of lights and darks.
They would do small plein air sketches on location
to use as reference for larger works done in the studio. 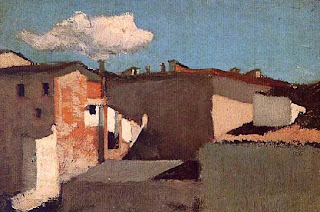 Unlike the Impressionists, these "sketches" were never exhibited.
The first time they were seen was in Florence in 1905
where they caused an immediate sensation.
(Google Images for more examples)
Reading about them inspired to try this. 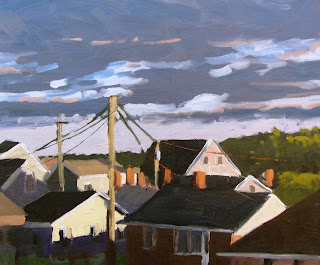 That, to me, is the eternal challenge!
Posted by Nancy Colella at 2:14 PM 6 comments 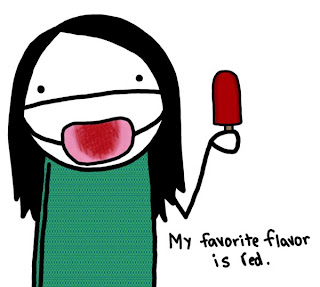 February is my favorite month.
It's all about LOVE and everything RED, my favorite color.
I'm not sure who sent me this, or where I found it
but I've saved it on my desk top for a long time.
The First Day of February seems like a great day to post it.
Happy February Everyone!

Note; Check out this months new paintings from the
Girls Who Just Wanna Paint!

Nancy Colella
Norwell, Massachusetts
I am a full time oil painter living and working the South Shore of Boston. My goal as a painter is to say as much as I can, with as few "well placed" brushstrokes as possible. My paintings are intuitive and spontaneous, meant to engage the viewer in a specific moment in time. This blog is designed to share a quick glimpse into my process of painting. All paintings are for sale by contacting the artist. saltydogstudio@comcast.net